How to transfer between train stations in London

Catching a train from the UK to Europe usually involves a transfer between stations in London. The most common connections are between London's major train stations and the Eurostar terminal at London St. Pancras International.

We recommend a one-hour period to complete most London transfers. However, some search results may display a shorter connection time. For these, we display a warning to alert you to the short city transfer. If you would prefer more time, you can edit the amount of time between trains. 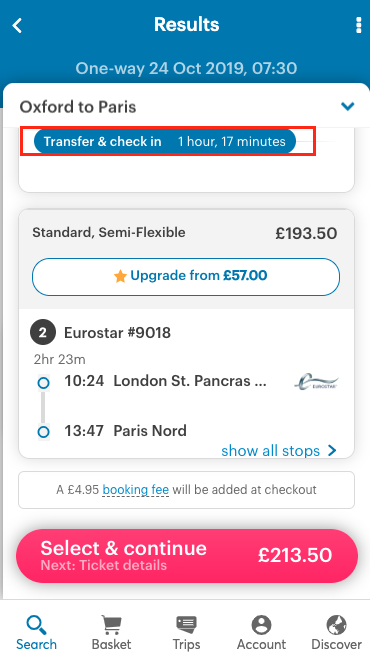 If your journey involves a London transfer, your ticket will normally include the cost of the transfer on London Underground (Tube), Docklands Light Railway (DLR) or Thameslink services between the relevant main London stations. Look for the ‘†' symbol, which is shown on eligible tickets.

We advise using the TFL Journey Planner to plan your station transfer in London. Our friends at CityMapper also provide an excellent transport app for when you're on the go.

From Euston
It's a simple ten minute  walk from Euston to London St. Pancras (see linked map). If you have lots of luggage or would prefer not to walk, you can catch the eastbound Northern or Victoria tube lines, St. Pancras is only one stop away.

From Paddington
The quickest way to travel between London Paddington and St. Pancras International is on the Circle (yellow) or Hammersmith & City (pink) line on the London Underground. Though it seems counter intuitive, when you alight from the train at London Paddington station, turn away from the main station concourse and follow the platform to the back of the station (follow the pink line on the floor!). Climb a short set of stairs onto a footbridge at the end of the platform, and follow signs to Circle line via King's Cross. All eastbound trains on the Circle or Hammersmith & City lines call at 'Kings Cross St. Pancras" Underground station where you'll be signposted to Eurostar departures.

From Waterloo
Take the northbound Bakerloo line to Oxford Circus, then get off the train and catch the northbound Victoria line to St. Pancras. Trains run every couple of minutes and the entire journey usually takes about 15 minutes.

From Liverpool Street
Take the westbound Circle, Metropolitan or Hammersmith & City line directly to St. Pancras, which is the fourth stop. Trains leave every few minutes and take 8 minutes to get to St. Pancras.

From Victoria
Alight the train at London Victoria and walk along the platform towards the station concourse. Make to leave the station via the main exit, at the front of the station, following signs for the London Underground. There are two entrances to the Underground, both of which enter the same ticket hall. Board a northbound Victoria (blue) line train. Kings Cross St. Pancras is the fifth stop.

From Kings Cross
It's just a short walk between stations to transfer between London Kings Cross and St. Pancras International, with step-free access. When you alight from a national rail train, simply walk to the end of the platform where you will find ticket barriers and an exit onto Kings Cross Square. Turn right and cross this large pedestrianised area, walking towards the grand red brick clock tower of St. Pancras hotel. When you meet St. Pancras road, cross the road but resist the temptation to use the first entrance - that is to Kings Cross St. Pancras Underground station. Instead, turn right and walk along between the two stations. The entrance to St. Pancras International is on your left after 150m, with Eurostar check-in clearly signposted.

To Euston
It's a simple ten minute  walk from London St. Pancras to Euston (see linked map). If you have lots of luggage or would prefer not to walk, you can catch the westbound Northern or Victoria tube lines, Euston is the next stop.

To Paddington
Take the westbound Circle or Hammersmith & City line. Trains run every couple of minutes, with an average journey time of 7 minutes. Paddington is the fifth stop.

To Waterloo
Take the southbound Victoria line to Oxford Circus, then get off the train and catch the southbound Bakerloo line to Waterloo. Trains run every couple of minutes and the entire journey usually takes about 15 minutes.

To Liverpool Street
Take the eastbound Circle, Metropolitan or Hammersmith & City line directly to Liverpool street, which is the fourth stop. Trains leave every few minutes and the journey takes 8 minutes.

The London Underground network is shown in detail on this map.